The Derek Williams Trust is pleased to announce the recent acquisition of a seminal work by late British artist, Victor Willing.  Place (1976-8) was inspired by Willing’s connection to the biblical Jonah, a favourite story of the artist’s and his siblings in childhood. Jonah was sent on a mission to save the inhabitants of Nineveh when a storm rose up. The crew drew lots to see who should be thrown overboard as a human sacrifice to quiet the tempest; Jonah lost, was swallowed by a whale and, after surviving three days in its belly, found himself vomited to safety on dry land. Early studies of Place depict a whale’s tail, while in the triptych the allusion is sublimated into green plant leaves alternately resembling sexual organs and the body of a whale.

In common with all his work from this period, Place uses a symbolic vocabulary of geometric shapes and disparate objects, framed within an architecture of blank walls and deserted spaces. The triptych sets at its centre Willing’s empty chair and bag within a covered shelter, like an abandoned stage set. The atmosphere of disquiet, and the dislocation caused by the split of images between three panels, has a very particular source. Working from his studio in a condemned school in Stepney, Place, as other works at this time, was the product of hallucinatory episodes brought on by extreme sleeplessness, a side effect of MS medication. During these episodes works would appear to him, fully formed, which he would then sketch. Place appeared as a vision through three holes in the wall.

His wife, Paula Rego, called the painting, ‘without doubt the best thing Vic ever did,’ in an essay on the painting for Fiona Bradley’s book, Victor Willing, published in 2000. Each panel of the triptych, she wrote, was intended as an alchemical symbol with intense personal meaning to the artist: ‘the flesh, the self, and the possibilities for traveling in the mind.’ 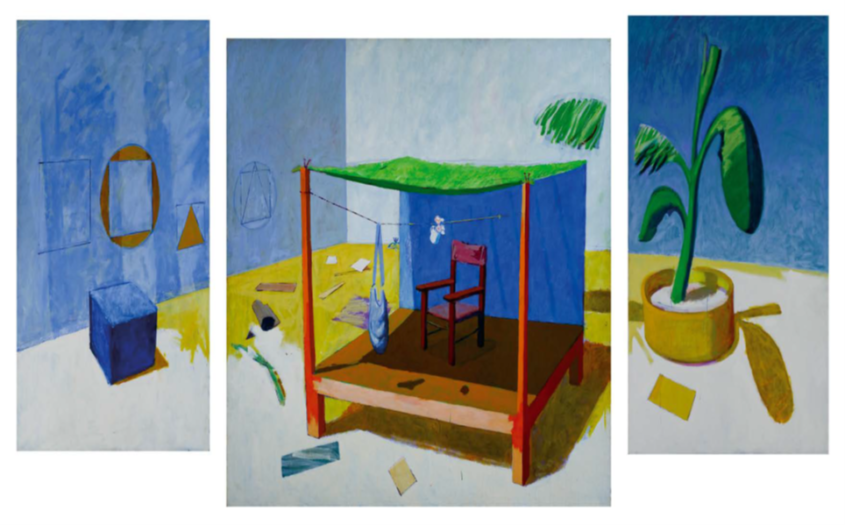