‘I was lost to the wheel’ said Lucie Rie of her time spent in the pottery studio at the Kunstgewerbeschule in Vienna from 1922-1926.[i]

Austrian-born ceramicist Lucie Rie (1902-1995) came to Britain in 1938 as a successful European potter.  Born to a wealthy Jewish Viennese family, Rie was forced to flee her country on the eve of the Second World War in fear of persecution by the Nazis and to seek sanctuary in London.  Here she set up a home and studio at a flat in Albion Mews.

Although Rie had found success and recognition as a modernist potter in Europe, her work was considered too different by fellow potters and curators in the UK.  At the time, British ceramics was a male-dominated world, in particular by the work of Bernard Leach whose work was inspired by Japanese ceramics.  By comparison, the work of Lucie Rie was seen as far simpler in style and decoration.

In need of an income, Rie turned to fellow Austrian refugee, Fritz Lampl who offered her a role at his newly formed Orplid glass studio where she was tasked to make glass buttons.  Resulting from this, Rie decided to set up her own ceramic button workshop from her studio, producing buttons for the fashion industry.  It became so lucrative that Rie had to employ assistants to help her in their production, including most notably Hans Coper.

Coper began working for Rie in 1946, with no previous experience of ceramics.  However, he soon proved himself talented and Rie began making collaborative work with him – mostly domestic ware including tea and coffee sets – which were sold at upmarket stores Liberty’s and Bendicks.

From the 1950s onwards, Rie established herself as one of the most internationally revered studio ceramicists.  Her work is simple in form and decoration.  She often incised the surface of the clay with fine lines (a technique called sgraffito) creating a vitality of pattern and texture.  Her use of the brush to apply glaze as opposed to dipping lent her work a painterly character.

Lucie Rie’s later work from the 1970s onwards displays experimentation with glazes using different mineral combinations to create vibrant colours such as blues, pinks, greens and yellows.  These colourful later works are evident in the Derek Williams Trust collection, who own 44 works in total by Lucie Rie, 42 of which were received as part of the bequest of ceramics from the late Anita Besson (1933-2015).  A close friend of Lucie Rie, she owned Galerie Besson which opened in the Royal Arcade, London in 1988 and became the first Bond Street gallery to show ceramics as fine art.

Lucie Rie died aged 93 in 1995 leaving an influential legacy upon the world of modern ceramics that continues to inspire contemporary ceramicists today.

There are currently seven Lucie Rie works on loan from the Derek Williams Trust to the exhibition Lucie Rie: The Adventure of Pottery which runs until 11 February 2023 at MIMA, Middlesborough and will then tour to Kettle’s Yard, Cambridge from March 2023. 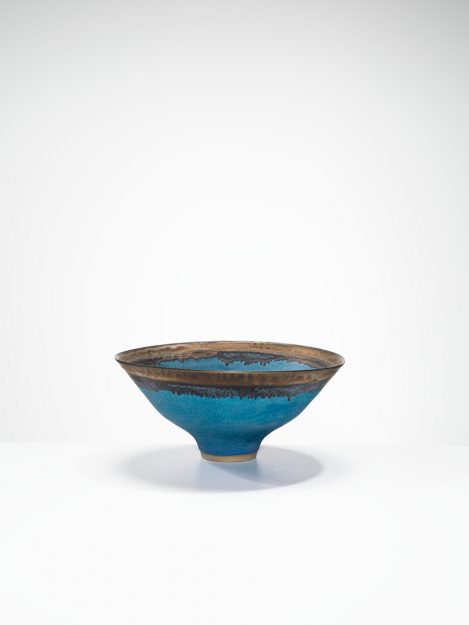